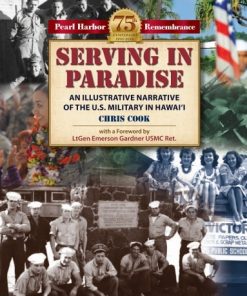 The military heritage of Hawaii spans a millennium, from the legendary days of ancient Hawaiian kings to the high-tech warriors of the 21st century.

The military heritage of Hawaii spans a millennium, from the legendary days of ancient Hawaiian kings to the high-tech warriors of the 21st century. Serving in Paradise tells their story in words and through select historic photos and illustrations, plus guides you to the memorials, monuments and museums that honor and portray this heritage.

This heroic journey begins in the days when Hawaiian warriors fought with weapons made of wood, stone and bone. In the 19th century the use of western weapons–of cannon, musket and rifle, swords–solidified the Kamehameha dynasty’s rule of the Islands. By 1900, following the overthrow of the Hawaiian monarchy in 1893, the United States made Hawaii a Territory. This opened the door to the establishment of army, navy and Marine bases on Oahu.

On December 7, 1941—America’s Day of Infamy. A blow-by-blow account of the day of the Pearl Harbor attack is given, describing both the American and the Japanese sides of the battle. World War II brought great change to Hawaii with over a million soldiers, sailors, Marines, airmen, and Coast Guardsmen serving in Hawaii and stopping through on the way to battles in the Pacific Theater.

In the Post-War era you will learn of Hawaii’s role in the Korean War, the Vietnam War, the Gulf War, and our nation’s 9/11-response battles in the Middle East.