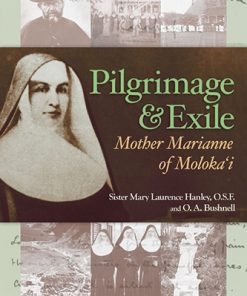 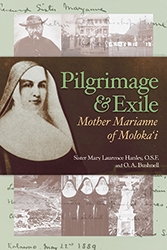 In November 1888, before the death of the heroic (now Sainted) Father Damien de Veuster, Mother Marianne went to Molokai to take charge of Bishop Home for Women and Girls. After Damien’s death, she was responsible for the holy priest’s Boys’ Home.

The Hawaiian Islands were an independent kingdom when, in 1883, Mother Marianne Cope, the provincial of the Franciscan Sisters of Syracuse, New York, was asked to send sisters to care for the Islands’ sick poor, particularly the victims of Hansen’s disease. She answered, “I desire to accept this work in the name of the great Saint Francis.” That year, she personally led the first group of six sisters to Hawaii.

Born in Germany, on January 23, 1838, Cope immigrated with her parents to Utica, New York, and in 1862, joined the Franciscan sisters in Syracuse, only two years after they were established as an independent branch of the Franciscan Sisters of Philadelphia. In 1877, she became the second mother provincial of the Syracuse sisterhood.

Mother Marianne never returned to Syracuse; she remained in the Islands for the rest of her life. During the first five years, under her guidance, twelve of her sisters cared for adults and their female children in Honolulu and Wailuku, Maui.

In November 1888, before the death of the heroic Father Damien de Veuster, Mother Marianne went to Molokai to take charge of Bishop Home for women and girls. After Damien’s death, she was responsible for the holy priest’s Boys’ Home (later renamed Baldwin Home). When in 1895, its buildup being accomplished, she suggested that Brothers be invited to take over teaching the boys skills.

Mother Marianne was eighty years old when she died on August 9, 1918. Her early resting place at Kalaupapa is marked by a high pedestal, surmounted by a statue of Saint Francis embracing the crucified Savior. In 2005, her earthly remains were removed to a shrine at the Motherhouse of the Sisters of Saint Francis in Syracuse, New York.

In 1974, the Sacred Congregation for the Causes of Saints granted the Franciscan Sisters of Syracuse permission to gather and submit preliminary research on the life and virtues of Mother Marianne. In 1980, Bishop John Scanlan of Honolulu appointed a historical commission—along with consultants—to collect all available documents concerning Mother Marianne, especially her writings, for submission to Rome, a major step toward her beatification. Pilgrimage & Exile, the fruit of this careful research, is the inspiring story of a great and holy woman, who lived a life of extraordinary dedication, sacrifice, and faith. The “beloved mother of outcasts,” Mother Marianne Cope, was proclaimed Blessed under the Pontificate of Pope Benedict XVI on May 14, 2005.