Mark Twain in Hawaii: Roughing It in the Sandwich Islands 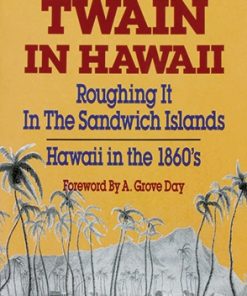 The noted humorist’s account of his 1866 trip to Hawaii at a time when the Islands were more for the natives than the tourists. Includes an introductory essay from Mad About Islands by A. Grove Day and 16 pages of illustrations.

Samuel Langhorne Clemens (1835-1910) had recently adopted his famed pen name of “Mark Twain” shortly before he landed in the Hawaiian Islands in 1866 to spend four months as a correspondent for the most prominent newspaper on the Pacific Coast. When, in 1872, he needed to supplement the chapters in his personal narrative Roughing It, he drew upon his twenty-five articles for The Sacramento Union and his personal notes to supply the additional recollections here presented.

The views of the “Sandwich Islands” reported by American’s most famous lecturer and beloved novelist in 1866 may differ somewhat from those of the visitor of the 1990s. “The Huckleberry Finn of foreign correspondents,” however, gives many faithful accounts of old Honolulu, the nobility and their ceremonies, the somnolent island of Maui, the native sport of surfriding, the City of Refuge on the Kona Coast, and the active volcano of Kilauea. And the light touch of the great humorist is seldom missing!

Foreword by: A. Grove Day