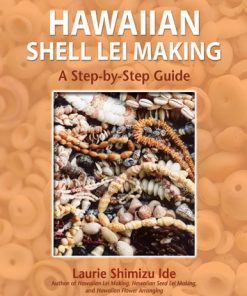 Over forty projects using nine basic methods of lei making are presented in this step-by-step guide to create an infinite variety of shell lei.

Shells are treasures, and like the sea in which they were born, they are easily overlooked and taken for granted. In both ancient and modern times, Hawaiian shells have been used as food, tools, lures, and fishhooks, weights for hukilau nets, trumpets, jewelry and toys, medicines and religious symbols, and even as currency.

Hawaiian Shell Lei Making combines stunning visual beauty with down-to-earth craft. It is a primer as well as a feast for the eyes. Step-by-step instructions are given which anyone can follow, along with expertly taken and detailed photographs. There are forty projects involving an almost infinite variety of shells—from the well-known and easy-to-find Olepe to the more exotic Momi and everything in between.

In addition to explaining tools, safety rules, and the process of the art, author and talented lei-maker Laurie Shimizu Ide demonstrates the nine basic methods for lei making. Readers are told where to find the shells, and in the process, another world of discovery is opened up, for there are places in Hawaii which have not been explored by even the most seasoned traveler or kamaaina.

Hawaiian Shell Lei Making can be used to create beautiful and timeless lei, and it can be read for sheer pleasure. The superb color photographs are works of art by themselves.

Above all, the reader will find that shell lei last a lifetime, and they cost nothing more than the love and care it takes to make. There’s no better way to say aloha.