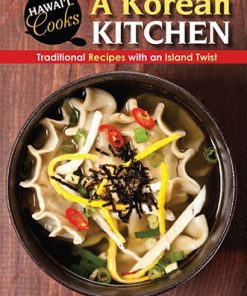 The cooking heritage of Korea adapted to Island influences and ingredients by the author of Go Home, Cook Rice and Food Lover’s Guide to Honolulu.

Kalbi, kimchi, meat chon and mandu are some of the delectable Korean dishes we love in Hawai‘i. But did you know that some of these dishes are unique to Hawai‘i in the way they are prepared and served?

Food writer Joan Namkoong, a second generation Korean American, draws on her island heritage to explain the Korean kitchen in Hawai‘i, distinctly different from a Korean kitchen in Korea. The ingredients, the seasonings, the textures, and flavors in Hawai‘i bear the history of Korean immigrants who came to the islands in the early 1900s. Succeeding generations and more recent immigrants have put their mark on Korean food in Hawai‘i, a popular cuisine that has evolved over the past century.

Korean food is a healthy cuisine that relies on many vegetables, grains, fermented foods, and simple cooking techniques that require little fat. Meats are served as a small part of this vegetable-centric cuisine that focuses on many tasty side dishes on the table. It’s a cuisine islanders love for its robust flavors and varied dishes.

Noted food writer Betty Shimabukuro of The Honolulu Star-Advertiser and cookbook author Muriel Miura have teamed up to present Hawai‘i Cooks, a series of cookbooks featuring the Island’s influential cuisines. Next in the series includes Portuguese, Okinawan, Japanese, and Chinese cooking.

Namkoong was born and raised in Hawai‘i where her father had a Korean restaurant in the early 1950s. She has been part of the culinary scene in the state since the mid 1970s, as the co-founder of The Compleat Kitchen retail stores and then as the food editor of the Honolulu Advertiser. As a freelance food writer, author, and consultant, she has written numerous articles and books and has been involved in establishing farmers markets in Hawai‘i.

Muk I / Mung Bean Jelly I

Mandu I / Korean Dumplings I