From Fishponds to Warships: Pearl Harbor A Complete History (softcover) 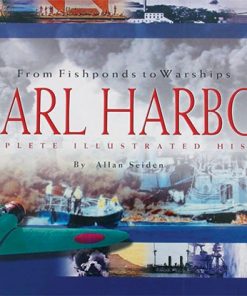 A walk through this famous site from its pre-settlement day, when it was an uninhabited topical lagoon, to the famous attack in 1941, on to the present where it has become an American icon visited by millions every year.

The Japanese attack on Pearl Harbor is forever burned into the national consciousness as a turning point in world history. Today, Pearl Harbor is a place of pilgrimage, not only for the generation of Americans that fought in World War II, but also for their descendants, and for hundreds of thousands of Japanese who come to pay their respects.

Yet the tropical lagoon that was catapulted into the spotlight that fateful day has a history of its own. Long before it became known as Pearl Harbor, it was a placid bay fed by streams that flowed down from Oahu’s mountains. This massive lagoon, known to the Hawaiians as Puuloa, was once home to an extensive system of fishponds that provided a rich and plentiful bounty.

Granted to the U.S. in negotiations with the Hawaiian government related to the import of Hawaiian sugar in 1888, Pearl Harbor grew in importance over the years, making a quantum leap when the U.S. headquartered its Pacific fleet there in 1940. By 1941, America was on war footing, with Hawaii at the helm as the central defense post of the western front. The stage was set, yet few anticipated the extremity of events to come.

From Fishponds to Warships: Pearl Harbor provides a sweeping view of the region’s past, from geologic origins to fishpond days, through the tense moments before and after the attack, and the years of reflection and repair right up to the present. A valuable resource for anyone interested in Pearl Harbor, it is a colorful work filled with rare photographs documenting the key military figures involved and the intense battle. Wartime posters, advertisements andn propaganda are also included, along with a nostalgic look at life in wartime Hawaii. To most people, Pearl Harbor is seen through a window of catastrophe, forever frozen in time as the “date which will live in infamy.” But the years leading up to and following the surprise attack are rarely examined, and this rich history is often missed. From Fishponds to Warships: Pearl Harbor not only gives a detailed visual account of the catastrophic raid, but it provides a much-needed context foro the event, examining the circumstances which brought this once-tranquil lagoon into the international spotlight.