A Harvest of Hawaii Plantation Pidgin: The Japanese Way 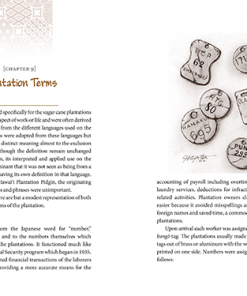 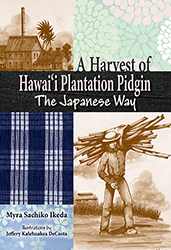 A Harvest of Hawai?i Plantation Pidgin is an important contribution to our understanding of plantation life and the Japanese experience in Hawai?i.

A Harvest of Hawai‘i Plantation Pidgin: The Japanese Way examines, from the perspective of language, the plantation experience of the issei and subsequent generations who came to Hawai‘i (Tengoku) to work in the sugar fields. Hilo-born Myra Sachiko Ikeda, shows how the Japanese language spoken by the first workers became influenced by the need to communicate with other workers, and how pidgin, the common plantation language that had developed earlier among the Chinese, Portuguese, and Hawaiians to understand each other, quickly integrated Japanese words.

Ikeda, sharing her personal story and motivation in tackling this project, includes important descriptions of plantation life along with discussion of camp names, children’s games like Jan Ken Po, and Hanabata Days.

She also shows that for workers living close together, socializing and sharing food at lunchtime, planation camps came to have a great or even greater impact on identity than ethnic background and the important role that Hawai‘i Pidgin English played in the dynamics of local identity.

A Harvest of Hawai‘i Plantation Pidgin is an important contribution to our understanding of plantation life and the Japanese experience in Hawai‘i.